On Friday morning (August 9th) Team Nova Scotia took on Team Newfoundland and Labrador in the fourth game of 2019 Baseball Canada Cup pool play for both teams. Team NL was 0 and 3 to that point and the “Cardiac Kids” from Nova Scotia were 3 and 0 on the back of three one run wins in a row. Another win for NS would guarantee them a bye into the semi-finals of the tournament and an opportunity to play for a medal.

Things started off with a bang for Team Nova Scotia. Starting pitcher Kyle Hunt made quick work of NL in the first inning with a strikeout and two groundouts. When Nova Scotia came up to bat, they were ready to rock. Leadoff man Ryan Fitzgerald started things off with a hard line drive hit to Left Field. Nick Gravel followed up with a hard grounder but Newfoundland was able to make the play and force out Fitzgerald at second for a Fielder’s Choice. Noah Boutilier was then walked on 4 pitches bringing up cleanup hitter Camden Rendell. Rendell proceeded to rip a hard line drive past the Shortstop and into the Left Field gap, scoring Gravel. NL managed to get an out next and then Shane Cowan came to the plate with two runners on. Cowan ripped a hard line drive into the Left Field gap for a Triple, scoring both Boutilier and Rendell. Camilo Riesgo then ripped the first pitch he saw for a single to score Cowan. Brett McMullin came up next and kept things rolling with a single of his own to move Riesgo to 3rd. Riesgo then scored on an error on the relay throw. Next the NL pitcher induced a Pop Up to end the inning but NS was up 5 to 0 after 1 complete.

In the second inning Team NL managed to get on the board. Alexander French led off with a single but was forced out on the Fielder’s Choice grounder by Liam Bavis. Jay Miller then reached on an error, moving Bavis to 2nd. Hunt then struck out Sebastian Ojeda looking for the second out of the inning. Ben Halfyard then worked a walk to load the bases. NL’s number 9 hitter grounded a ball between 3rd and Short to score Bavis. Hunt then induced a Groundout to end the inning and keep the damage at only 1 run.

In the bottom of the 2nd, NL replaced starting pitcher Michael Healey with Dylan Morgan. After inducing a Fly Ball out, Morgan then gave up a hard Line Drive single to Nick Gravel. After then inducing a line drive out from Noah Boutilier, Morgan next faced Rendell, who hit a hard line drive to deep Center that bounced off the Center Fielder’s glove to score Gravel. Morgan then induced a ground ball out to end the inning with a score of 6 to 1 NS.

In the top of the 3rd, Team NL was able to close the gap. Jacob Gillis led off the inning with a line drive single. Hunt then struck out Chase Tucker looking. Alexander French then singled. Hunt started the next at bat but after reaching 55 pitches was replaced by Nolan O’Brien to ensure he was still available to pitch later in the tournament. O’Brien ended up finishing a Walk to Bavis to load the bases. Jay Miller then hit a ground ball single to score Gillis and French. O’Brien then got Ojeda to ground out but Bavis scored on the play. Halfyard flew out to center to end the half inning and the score was now 6 to 4 for NS.

In the bottom of the 3rd Nova Scotia started a two-out rally. Brett McMullin and Duncan McLaughlin both walked. Fitzgerald hit another line drive to Left Field but McMullin was not able to score on the hit. With the bases loaded Gravel pulled a hard line drive down the first baseline but the NL First Baseman made a nice play to end the rally.

In the top of the 4th O’Brien struck out Whyte and the induced groundouts from Abbott and Gillis for a 1-2-3 inning. In the bottom of the inning, NS got another two-out rally going. Short walked and Cowan singled to get things rolling. A pop up to Short ended the rally for NS.

In the top of the 5th, Newfoundland got things rolling again. Tucker singled and French followed that up with a Double. Bavis then singled to score Tucker. O’Brien then struck out Miller to slow the NL momentum. Ojeda got things going again though with a single to score French. After Ojeda was caught trying to steal second, Halfyard was walked and Bavis scored on a Wild Pitch. Kiwean Song came on to replace O’Brien and closed out the half inning with a strikeout of Whyte. In the bottom of the 5th, Chase Tucker came to the mound for NL to replace Morgan. He faced 4 batters in the inning giving up only a line drive single by Fitzgerald. At the end of the 5th the score was 7 to 6, with Newfoundland taking their first lead of the game.

The top of the 6th started out OK for Nova Scotia but quickly went downhill. Song induced a groundout from Abbott but then hit Gillis with a pitch to put him on. Tucker then reached on an error. Newfoundland then had three hits in a row including two bloop singles to score 2 Runs and load the bases. Song then walked Ojeda to score a 3rd Run. Pinch hitter Dawson O’Toole-Oldham hit another single to score another run. Song then struck out Whyte again and got Abbott to ground into a Fielder’s Choice to end the inning. In the middle of the 6th the score was 11 to 6 for Newfoundland.

In bottom of the 6th NS had some work to do and ended up being successful with a two-out rally this time. Short got things started with a Hit By Pitch. Cowan then singled. Corson O’Rourke came on as a Pinch Hitter and Tucker immediately Balked to score Short and move Cowan to 2nd. O’Rourke then singled to score Cowan. Singles by Breton Sibley and McLaughlin loaded the bases but the inning ended when Fitzgerald hit a Fly Ball over the Left Fielder that was covered by the Center Fielder who was playing deep. At the end of 6 the score was 11 to 8 Newfoundland.

In the top of the 7th Song settled down giving up only a single to Tucker. Down by 3 runs in the bottom of the 7th Nova Scotia needed a big rally and the “Cardiac Kids” came through with just that. Gravel got things started with a Walk. With a heads up play Gravel kept rolling past first, stole 2nd and induced a wild throw from Tucker to move to 3rd. That seemed to rattle Tucker a bit and he then hit Boutilier with a pitch. An error by the Second Baseman on Rendell’s grounder scored Gravel to make it 11 to 9. Tucker then walked Mike Short to load the bases and Liam Bavis came in to replace him on the mound. Shane Cowan then lined out to Center and O’Rourke hit into a Fielder’s Choice at home. That brought up Breton Sibley with the bases loaded and two outs in the bottom of the 7th. Sibley did not let the pressure get to him. He promptly hit a deep fly ball to right-center for a Double, scoring Rendell, Short, and O’Rourke for Nova Scotia’s second walkoff win in a row.

There were many hits in this game on both sides but Sibley’s was by far the most important and so was awarded the Player of the Game in this one. 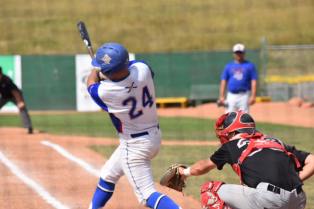